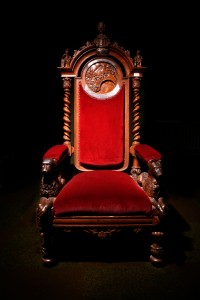 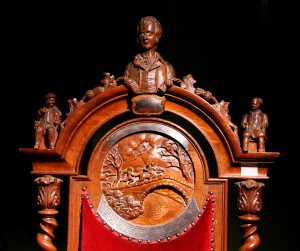 On display: in the museum exhibition space

This remarkable chair is made of wood sourced from the Kilmarnock printing press which produced the first edition of Robert Burns’s work Poems Chiefly in the Scottish Dialect known as ‘The Kilmarnock Edition’. It was published on the 31st July 1786 at the cost of three shillings per copy. 612 copies were printed and the edition was sold out in just over a month after publication. The printing press no longer exists but in its stead there are two statues: one of Burns and one of John Wilson (the owner of the press) to commemorate the publication of Burns’s first works.

This chair was constructed in 1858, just before the Burns Centenary Festival in Ayr in 1859. The one hundredth year anniversary of the bard’s birth was celebrated far and wide by many. One contemporary counted 676 local festivals in Scotland alone, thus, showing the widespread popularity of Burns.

The chair has plush red velvet on the cushion and is elaborately carved with symbolism and references to some of Burns’s most loved works. Each arm rest ends with a carving of a dog, Luath and Caesar, from the poem ‘The Twa Dogs’.

A carving of Robert Burns himself, after the artist Alexander Nasmyth’s famous portrait – whereby he is shown fashionably dressed in a waistcoat, tailcoat and stalk – is placed in the centre at the highest point of the back of the chair with the infamous characters Tam and Souter Johnnie from the narrative poem ‘Tam o’ Shanter’ on either side. Thistles, commonly regarded as the floral national emblem of Scotland, decorate the gaps between the figures.

The central carving is of the climactic scene of Tam crossing the Brig o’ Doon atop of his trusty cuddie (horse in Scots) Meg with Nannie the witch at their heels. The Brig o’ Doon is actually a real bridge and is located in Alloway where Burns was born and lived for seven years.

A small plaque above this quotes a verse from Burns’s poem ‘The Vision’ which was written in 1785 and published in Poems, Chiefly in the Scottish Dialect. It takes the form of a poetic ‘dream vision’, a form used in medieval Scottish verse and revived by Allan Ramsay in his own poem ‘The Vision’, from which Burns takes his title and was influenced and inspired by immensely. In the long narrative poem, Burns as speaker returns from a hard day in the fields and, after resting by the fireside, falls into a dream state in which he is visited by Coila, a regional muse. Coila (whom the speaker is clearly attracted to) addresses Burns, describing how she watched his development from a young age – thereby offering an imaginative reworking of Burns’s emergence as a poetic talent. She ends with a confirmation of his poetic mission and crowns him as bard. The striking thing here is the self-consciousness Burns displays about his position even this early in his career.

The inclusion of these particular carvings could be symbolism of the themes in which Burns explored most through his works: nature with the dogs representing this; the supernatural via the Brig o’ Doon scene; comradery through Tam and Souter Johnnie the “drouthy cronie” and the nature of the self and humankind through the quote from ‘The Vision’ and Robert Burns himself.

Interestingly, during a visit to Burns Cottage in 1965, the boxing legend Muhammad Ali was pictured sitting in this chair. Following this visit he was made an honorary member of Alloway Burns Club. If you are intrigued by this then please read a previous blog by volunteer Alison Wilson about an extraordinary meeting to do with this celebrity visit to Alloway here: https://burnsmuseum.wordpress.com/2016/06/13/memories-of-muhammad-ali/.

The following blog post was written by RBBM’s Learning Officer as a guest blog for Museums Galleries Scotland – http://nationallysignificantcollections.scot/ 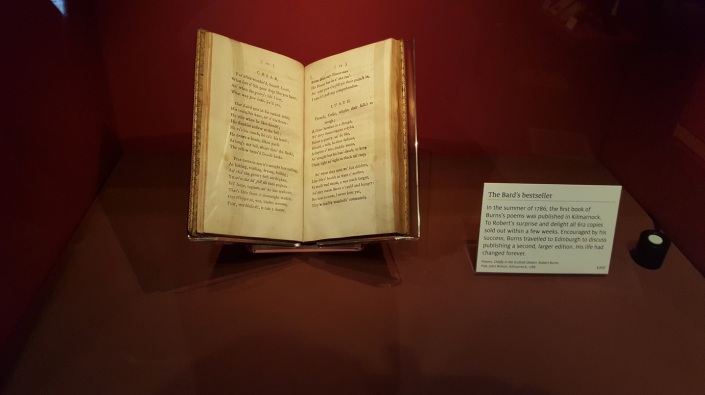 Few objects associated with Robert Burns are as well-known, or as instrumental to his fame, as the ‘Kilmarnock Edition’. Published on the 31st July 1786 by John Wilson of Kilmarnock, Poems, Chiefly in the Scottish Dialect was the first volume of poetry and song to be written by the man who was to later become Scotland’s National Bard. Containing some of his best-loved works including Tae a Mouse, The Cotter’s Saturday Night and The Holy Fair, it is one of the items in the Robert Burns Birthplace Museum’s collection treasured most by both staff and visitors. 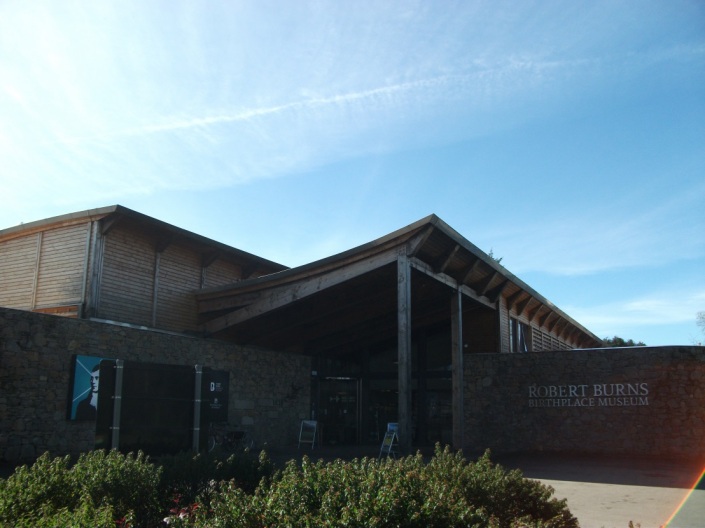 The Robert Burns Birthplace Museum (RBBM) is based in Alloway, South Ayrshire and is run by the National Trust for Scotland. The site consists of the Birthplace Cottage; Alloway Auld Kirk and the Brig o’ Doon (both of Tam o’ Shanter fame); Burns Monument and gardens; and of course the museum itself. The site is one of three in the ‘Burns Group’, also comprising of the Bachelors’ Club where the young Robert set up his own debating society, and Souter Johnnie’s Gallery, once the home of John Davidson (on whom Burns may have based the character Souter Johnnie in Tam o’ Shanter), and now an art gallery and craft shop showcasing local work.

The museum collection comprises of over 5,500 objects including 2 Kilmarnock editions. Only 612 copies of this first edition were printed, each containing 44 poems and songs written by the Bard. Although John Wilson was known for celebrating local talent, he was still reluctant to take a chance on an unknown poet from Ayrshire – in the end it was agreed that he would print the work only if Burns could raise enough advance subscriptions. The book cost 3 s each – 350 copies went directly to subscribers, and the rest quickly sold out within a month.

Reviews of the Kilmarnock edition were largely positive, although some made reference to Burns’s supposed lack of education (despite his home schooling by tutor John Murdoch and his familiarity with a range of literary and enlightenment figures including Alexander Pope, Adam Smith and Robert Fergusson). The Monthly Review in December 1786[1] also lamented Burns’s use of, ‘an unknown tongue, which must deprive most of our readers of the pleasure they would otherwise naturally create; being composed in the Scottish dialect, which contains words that are altogether unknown to an English reader…’. This seems a strange notion today, when Burns’s use of Scots is regarded by many as one of his best loved and most distinctive features.

Despite sentiments of this nature, the book began to circulate in Edinburgh, attracting positive attention from eminent society figures. Within 8 weeks, Burns was thinking of re-printing. The second edition of Poems, Chiefly in the Scottish Dialect (the First Edinburgh edition), was printed by William Smellie and published by William Creech in Edinburgh on 21st April 1787. The cost of this was 5 s to subscribers and 6 to other buyers. Over 3,000 copies were published, firmly establishing Burns’s reputation and paving the way for his future success as a poet and songwriter, both during and after his lifetime. 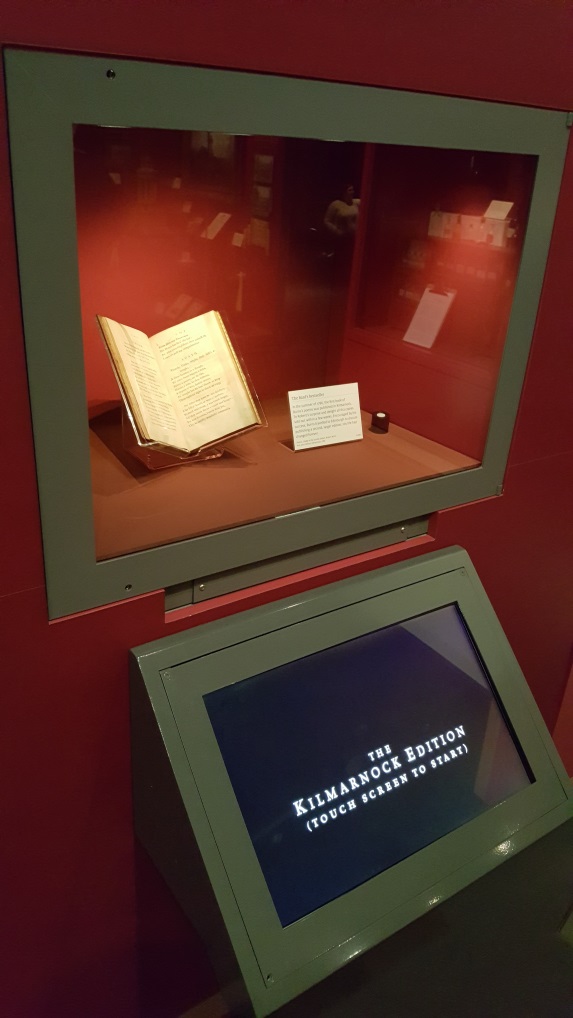 Today, RBBM displays a Kilmarnock edition alongside an interactive facsimile which allows visitors to browse the pages digitally, therefore preserving the original for future generations. But this is not the only item of interest we have relating to this first volume of Burns’s works. 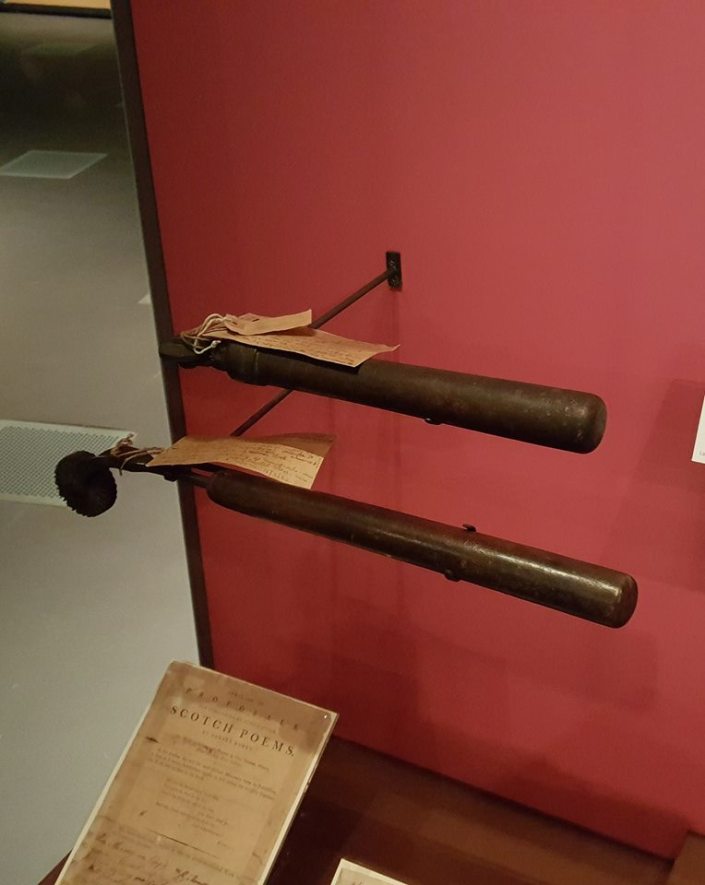 Above we have the printing stocks used to decorate books published by John Wilson in Kilmarnock, and below is an elaborate seat fashioned from the printing press which was used to print the first edition of Poems, Chiefly in the Scottish Dialect. It was converted into a chair during the Victorian period in an early example of ‘upcycling’, and was also famously the chair Muhammed Ali sat in when he visited Burns Cottage in 1965.[2] 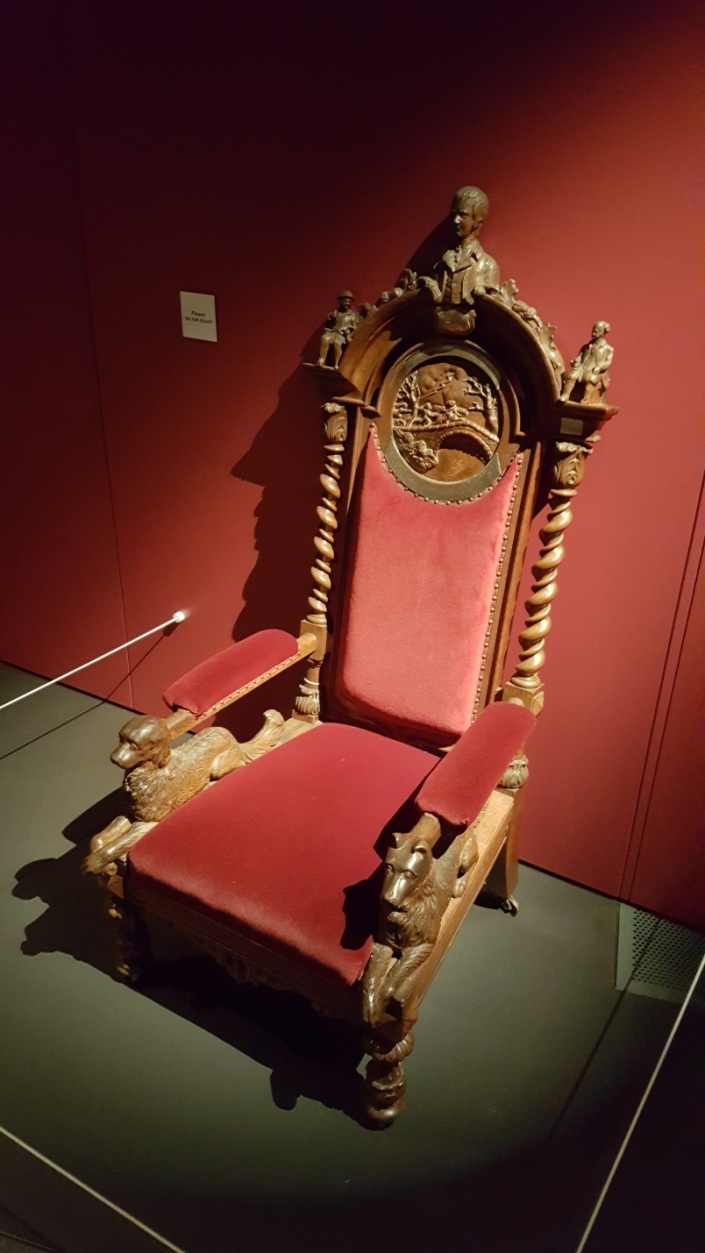 The 5,500 objects in RBBM’s collection include original manuscripts of Burns’s works, letters to and from the Bard, artefacts belonging to Burns and his family/friends, artworks, books, Burnsiana (trinkets relating to Burns), and more. Together they make up the most extensive collection of Burns related objects in the world. But none would be important today without the book of 44 poems and songs, originally sold for 3 s each, representing an Ayrshire farmer’s first step towards becoming Scotland’s National Bard.

‘Perhaps this Christian volume is the theme…’

The priest-like father reads the sacred page,
How Abram was the friend of God on high;
Or Moses bade eternal warfare wage,
With Amalek’s ungracious progeny;
Or how the royal bard did groaning lie
Beneath the stroke of Heaven’s avenging ire;
Or Job’s pathetic plaint, and wailing cry;
Or rapt Isaiah’s wild, seraphic fire;
Or other holy seers that tune the sacred lyre.

Bibles form key building blocks throughout the life of Scotland’s Bard. His father William was an extremely religious man, and Burns credits him with the inspiration for the ‘priest-like father’ described in the Cotter’s Saturday Night. This religious upbringing, especially when mixed with William’s fierce desire to see his children receive a good education, would have had a huge impact on the young Bard, although as we see in other poems he didn’t always agree with the views of the Kirk itself!

However, this Bible did not just have religious significance. William wrote the names and birthdates of his and Agnes’s children inside the front cover, creating a touching memento for themselves and leaving a lasting legacy for Burns’s followers in the absence of a birth certificate.

This tradition was later carried on by Robert in his own family Bible, inscribing the names of himself, Jean Armour and eight of their nine children within it. His youngest son, Maxwell, was born on the day of the poet’s funeral and so was not entered by the poet himself.

Bibles featured at other key moments in the life of the Bard. This Bible was published by the same printer as published Burns’s Kilmarnock edition, and the book would have played a key role in the Masonic rituals young Robert took part in after he joined the Freemasons.

However, it is perhaps this Bible that was the most poignant to Burns himself. As the poet was gathering together subscriptions to support his first volume of poetry in 1786, he began an intense love affair with ‘Highland Mary’, probably a woman called Margaret Campbell. The Bard presented Mary with this two volume Bible, which some believe may have equated to a form of marriage vow. Inside the volume is Robert Burns’s Masonic mark, the words ‘Robert Burns Mossgavill’ and some Bible verses in the poet’s handwriting. A lock of hair which is thought to be Highland Mary’s was also found in the volume.

However, the affair was destined to be short-lived. Soon after receiving the Bible, Margaret set out to Greenock to visit her family, and died shortly afterwards, possibly while giving birth to Burns’s child. In many roles, be it recording birthdays, forming the centrepiece of ritual, or constituting a heartfelt gift to a lover, the ‘Christian volume’ (The Cotter’s Saturday Night) really did constitute a theme in the life of Robert Burns, and features prominently in RBBM’s collections.